Another important tidbit for NTT IndyCar Series fans is out as INDYCAR and NBC announced starting times for the 2020 season. The full television schedule is also included.

There are different starting times at four races in 2020 from 2019. Those include the March 15 Firestone Grand Prix of St. Petersburg, the AutoNation INDYCAR Challenge at Circuit of the Americas on April 26, a later starting time for the Saturday night race at Iowa Speedway on July 18 on NBCSN

Those four returning races represent the only significant green flag start time changes from a year ago in the 17-race 2020 NTT IndyCar Series schedule, beginning with the season-opening Firestone Grand Prix of St. Petersburg scheduled for Sunday, March 15.

The August 16 Honda Indy 200 at Mid-Ohio will be moved to an earlier starting time and will be broadcast on NBC. Previously, the race was scheduled for 4:05 p.m., but has been changed to a 12:45 p.m. Eastern Time green flag.

INDYCAR’s return to Richmond Raceway on Saturday, June 27 will begin at 8:15 p.m. ET. That is the only new event on the schedule.

Detailed broadcast information for the entire season will be announced at a later date.

Here are the notable changes to the starting times on the schedule:

The Firestone Grand Prix of St. Petersburg, which began at 1:40 p.m. ET this past season, will now have a 3:30 p.m. green flag. The race on the downtown streets of St. Petersburg, Fla., will be celebrating its 10thanniversary as the series’ season opener and be televised on NBC Sports Network.

The AutoNation INDYCAR Challenge at Circuit of The Americas on Sunday, April 26, will have a similar shift, moving from a 1:43 p.m. ET green flag this past season to 4:10 p.m. (3:10 p.m. local) in 2020. The permanent road course in Austin, Texas, will play host to the fourth race of the season and be broadcast on NBCSN.

“The return of a night race for INDYCAR at Iowa Speedway is exciting news for our race fans, sponsors, and the entire region,” Iowa Speedway President David Hyatt said. “The cars look great under the lights, and the competition should be even more fierce given what should be cooler conditions. Our track provides some of the best racing you’ll see anywhere, which will be good for attendance. This will be a can’t-miss weekend for all race fans.”

The return to a true night race at Iowa was the result of fans requesting it. The race will begin at 8:00 p.m. CT on NBCSN and the Advance Auto Parts INDYCAR Radio Network. And for fans and drivers, it is nostalgic, hearkening back to the first race many of them experienced … a night race on a short track.

The series hasn’t held a race that began after dusk at Iowa Speedway since 2015, and drivers and fans are welcoming it. Not only does it look more vibrant — and create sparks as cars bottom out — it also makes for better racing. Tires grip better when the track is cooler. Fans also avoid sweltering conditions during summer afternoons.

The NTT IndyCar Series heads to Richmond Raceway – the only new addition on the 2020 schedule – for the 11th race of the season on Saturday, June 27. The field will take the green flag at 8:15 ET for the start of the first Indy car race at the .75-mile oval since 2009. The race will be broadcast on NBCSN. 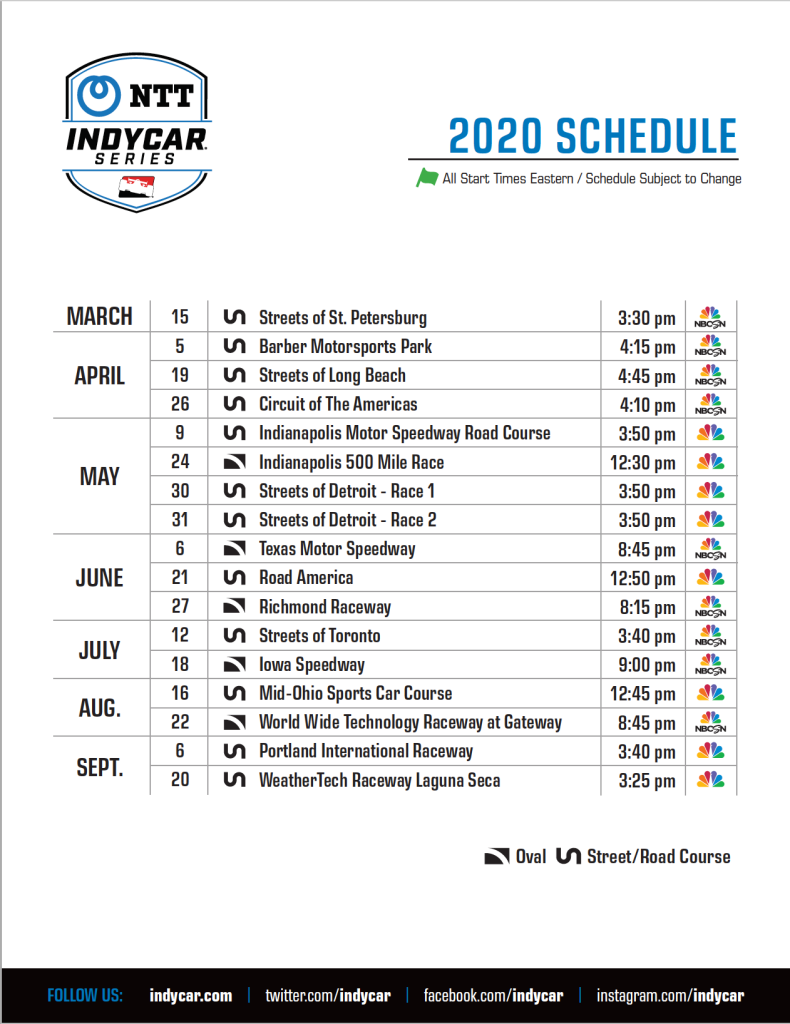 Travis Pastrana will attempt to make his first NASCAR Cup series race on February 19 with the grandaddy of them all, the Daytona 500, but his road to get there will not be paved and his car will have only two fenders as he tackles Florida Speedweeks and the DIRTcar Nationals.

In mid-January, it was announced Pastrana will attempt to qualify a third car from 23XI Racing that fields fulltime entries for Bubba Wallace and Tyler Reddick. Sponsorship will come from Black Rifle Coffee, who approached him during the offseason to ask what kind of “really cool stuff” he would like to do. Pastrana replied, “the Daytona 500” with a characteristic laugh in his voice.

But there is a saying among dirt track fans that goes, ‘asphalt is for getting to the track; dirt is for racing’ – and Pastrana is taking that to heart.

After racing on the snow in Nitro Rallycross February 4-5 in Calgary, Alberta, the original plan was to head to Volusia Speedway Park in Barberville, Florida to watch the modified and late model races. Until Crafton called him out for not racing.

Pastrana relayed the conversation: “I told Crafton [I was coming to watch] and he goes, ‘Ah, too much of a sissy to drive?’ I called Arpin, and said, ‘So, Longhorn, I heard you guys have vehicles that can kick the crap out of Crafton’s vehicle.’ [Arpin] said, ‘Yeah, if you don’t suck, you can beat him.’ I said, ‘Alright, I’m in.’”

The DIRTcar Nationals run from February 6-18. The first week features six UMP Modified Mains each night they run, on Monday (Feb. 6), Friday (Feb. 10), and then the prestigious Gator Championship race on Saturday (Feb. 11). Pastrana hopes to run every night in one of Arpin’s cars, also with sponsorship from Black Riffle Coffee.

And this is not just for bragging rights; there is money on the line. Pastrana and Crafton have a $1 bet on who has the best finish.

While Pastrana is accustomed pitching his car sideways on a combination of left and right turns in a rally car – he won the Nitro Rallycross race at ERX Motorsports Park in Minneapolis, Minnesota last October and became the first two-time winner in the 2022/23 season at Wild Horse Pass in Phoenix, Arizona in November – the DIRTcar Nationals will be an entirely different proposition.

It took a day for Pastrana to get comfortable in the modified. And it took a little coaching from Arpin, who has experience in both dirt modifieds and rally cars to make him fast.

“[Arpin] showed up the second day after hearing how bad the first day was,” Pastrana said, which is confirmed in the Instagram post embedded above. “But he just told me, until you commit, it’s not going to work. Once I committed, it started making a lot of sense. But coming in, if you’re lifting off the gas while trying to turn, it just doesn’t turn and all your natural instincts say, ‘Don’t get on the gas.’ So, yeah, I feel like it should suit my driving style because I’m more of an aggressive sideways type of driver, but it was very difficult. Turning and sliding, I’m fine. Getting it there is not the easiest.”

Pastrana has one previous start in a dirt late model that came in the 2010 Prelude to the Dream. He finished 23rd in the 27-car field and was three laps off the pace. He wasn’t the only driver having difficulty getting a feel for the car that night; Jeff Gordon finished on the same lap, only one position ahead of him.

The price of the weekend could well exceed the dollar he may lose to Crafton.

“It’s going to be an expensive weekend,” Pastrana said. “Not everything is covered. If I crash anything, it is going to be all on me. This is one of those things where I want to come down and have fun. I want to hang out with the crowd, I want to sign autographs and give high fives. Especially for the Modified crew, that’s the grassroots racing that I love and some of my friends are involved with. We’ll be camping down there with Arpin and all the Longhorn guys, just hanging out. I feel like that’s a great opportunity for us to bring a lot of [US] veterans and bring people that are into racing and aren’t into racing, friends and family, and just have an awesome time.”

And it’s not out of the question that Pastrana could add another top-10 to his record book in the DIRTcar Nationals. After the rocky first day, Pastrana gained speed. Enough so that Arpin’s confidence was raised.

“We’re pretty confident Crafton is going to have to run hard to keep his dollar,” Arpin said.

Ford will return to Formula One with Red Bull, supplying engines in 2026
Powered by WordPress VIP