Verizon Team Penske’s Will Power assumed the lead in the Rainguard Water Sealers 600 after the opening round of pit stops following a lap 38 caution. Power emerged in the lead and thwarted off a series of challenges for the rest of the night to lead the most laps and dominate for his second win at Texas Motor Speedway (he won Race two of the 2011 doubleheader).

Throughout the night Power managed to fend off challenges from all comers, including the likes of Scott Dixon, Simon Pagenaud, and even Tristan Vautier, and later Tony Kanaan, who was in the crosshairs for another reason entirely courtesy of the night’s biggest accident.

“It was very intense. I could see (Scott) Dixon was able to pass me at the start/finish line. So, I was starting to think about what I was going to do there at the end,” Power said of the late-race battle.

The victory also holds personal significance for Power, whose wife Liz is a Texas native.

“We were just talking about it and her cousin said ‘Man you haven’t won for me here yet!’  And like, he has come year after year and I really didn’t think that it would be this weekend, but oh man, you don’t understand how good that feels,” Power added in victory lane.

Behind Power, carnage and chaos reigned in the remainder of the 22-car field, with only six cars running on the lead lap at the checkered flag.

The carnage began on lap 38 when Alexander Rossi got pinched in between Scott Dixon and Tony Kanaan entering Turn 3, and spun before impacting the outside wall.

Shortly thereafter there was contact on pit road between James Hinchcliffe, Helio Castroneves and Takuma Sato. Hinchcliffe got loose exiting the pits, spinning into Castroneves, who then spun into Sato.

Castroneves was the next to crash heavily, this time on lap 91 after an apparent mechanical failure saw his car shoot into the outside wall exiting turn two. He slid down the backstretch and impacted the inside wall as well. Although he took his time exiting the car, he did climb out under his own power and walk away.

Ed Carpenter then suffered a quick spin on a lap 103 restart, but managed to keep it going.

Many drivers pointed the blame at Kanaan, with Hinchcliffe mentioning that Kanaan moved up into him to start the wreck. Kanaan’s team owner Chip Ganassi blamed Hinchcliffe, with Hinchcliffe then retorting “that’s adorable” to that accusation.

Castroneves’ earlier incident he blamed on a right front tire failure and fellow Team Penske driver Josef Newgarden had to pit earlier on sequences owing to blistering. INDYCAR then dictated that competition cautions would need to be implemented to address the blistering tires, after no more than 30 laps of green flag competition.

Following one of these cautions on 190, Newgarden was the next victim on lap 201. Newgarden had tried to pit prior to the yellow but then was told he’d need to pit again. Alas, Newgarden tried a three-wide pass on the outside of Turns 3 and 4, but drifted too high and broke loose, sliding into the the outside wall in the process.

Following another competition caution on lap 225, Dixon and Takuma Sato brought out the final caution of the race, with Sato clipping the grass and sliding into Dixon. Both cars spun and impacted the wall in turn one, with Conor Daly and Max Chilton collected in the aftermath.

Power led the field home under caution ahead of Kanaan, who’d recovered from going a lap down for being assessed a stop-and-hold plus 20 second penalty for the avoidable contact, Simon Pagenaud, Graham Rahal, Gabby Chaves, and Marco Andretti, with only six cars running at the end. Daly, Chilton and JR Hildebrand were listed as classified finishers but with damage on their cars.

WHO HAD A GOOD RACE? The six cars and drivers who finished on the lead lap. Power, lost in all the chaos, led 180 laps in a dominating performance…Kanaan overcame a stop and hold penalty for his role in the lap 153 crash to finish second…Pagenaud returned to the podium for the first time since his win at Phoenix…Graham Rahal seemed to lack the outright speed to battle for the win, but made it through the night unscathed to finish fourth…Chaves brought the Harding Racing No. 88 Chevrolet home in fifth, giving the brand new team finishes in the top ten and top five in its first two starts…Marco Andretti had a quiet night, but like Rahal, missed all the crashes and finished sixth, his best result of the 2017 season…Conor Daly (seventh) and Max Chilton (eighth) were credited with top ten finishes despite getting collected in the late crash with Dixon and Sato…Vautier was stellar in his return to the Verizon IndyCar Series and was a top five contender all night long before getting caught up in the lap 153 crash.

WHO HAD A BAD RACE? Tough seasons continue for Ryan Hunter-Reay and JR Hildebrand, with both getting collected in the lap 153 wreck. Hunter-Reay’s fourth at St. Petersburg and third at the Indianapolis Motor Speedway Road Course remain his only top ten finishes of the year, while Hildebrand’s third-place at Phoenix is his only finish inside the top ten…Charlie Kimball’s potentially strong night ended shortly after it started on lap 41 due to an oil leak…Helio Castroneves hammered the turn two wall on lap 91. Though he took his time climbing out, he walked away under his power and alleged afterward that the right front tire went down to send him into the wall…like Hildebrand, Hunter-Reay, and Vautier, Ed Carpenter, Mikhail Aleshin, Ed Jones, and Carlos Munoz were victims of circumstance and innocent bystanders collected in the lap 153 crash, though Carpenter and Hildebrand returned to the track to finish 11th and 12th following repairs.

NOTABLE: Dixon retains the championship lead, with Pagenaud now 13 points behind him in second…tenth-place James Hinchcliffe is only 94 points behind Dixon as the Verizon IndyCar Series heads to Road America for the KOHLER Grand Prix (June 25, 12:30 p.m. ET, NBCSN)

QUOTABLE: From Hinchcliffe (on the contact with Kanaan that precipitated the big wreck): “We had a run on (Tony Kanaan) and he had plenty of room on the left, but he just came to the right. If you look at the replay, he comes all the way from the white line to the middle of the racetrack, just pinched me into Mikhail (Aleshin). Either his spotter didn’t tell him we were three wide or what, but I couldn’t go anywhere, I was sandwiched in the middle. I was not expecting him to do that; Tony has more experience in this kind of pack racing than anybody. I went wheel-to-wheel with him last year for the win and nine times out of 10 would do that all day long, but for whatever reason, he wasn’t playing very nice today and wrecked a lot of good equipment.” 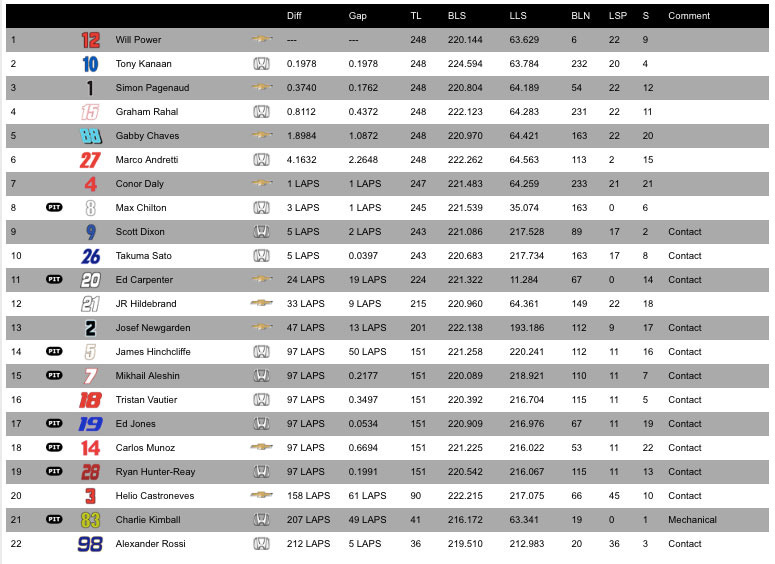