Schmidt also revealed he has spoken to Zak Brown of McLaren about joining forces for a full-time IndyCar Series team in the future, but he would have to become a Chevrolet team for that to happen.

Now that Alexander Rossi has made his decision to stay with Andretti Autosport for at least the next three seasons, plus an option year, the focus shifts to Herta, who is in his first season with Harding Steinbrenner Racing.

“We are very interested in Colton Herta,” Schmidt told NBCSports.com. “He is a very talented, young driver. 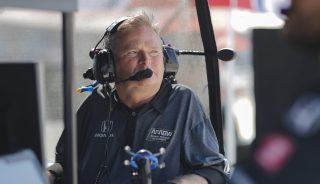 “I’ve heard that they (Harding Steinbrenner Racing) have an option as well as Michael Andretti. Now that the Alexander Rossi contract has been announced, who knows where that goes.

“Right now, we have another year on James Hinchcliffe’s contract. Marcus Ericsson has said numerous times he wants to come back to our team. Right now, we are vetting that out fully to see where that stands for now, because we aren’t running more than two cars next year.

“Right now, from what I’ve heard they have options on Colton and Mike Harding is going to do everything he can to keep him in the seat. There is lots of speculation there.”

The interest in Herta is increasing because Harding Steinbrenner Racing is underfunded. Team president Brian Barnhart told NBCSports.com at Iowa that the team needs to find either an additional sponsor or an additional team owner to invest in the Honda-powered team.

Team owner Michael Andretti is also involved because he owns part of Herta’s contract and uses Harding Steinbrenner Racing as a partnership team in IndyCar. That team has an engineering alliance with Andretti Technologies, and many of Herta’s crewmembers came from Andretti Autosport.

“I have some control of Colton’s contract,” Andretti told NBCSports.com. “It’s complicated, put it that way. If it stays in the family, I have control. If things fall apart, then everybody loses control. The goal is to keep it all going somehow. Unfortunately, the sponsorship they had is not coming through, and that is putting a lot of pressure on Mike Harding.

“We’re trying to help them. I consider them friends – the Hardings and the Steinbrenners. We have to figure out how to help our friends, and that is what we are trying to do to keep him in our family.

“Obviously, we want to figure out how to keep him in our family. We want Colton to remain in our family. I was really happy we were able to do what we did. The goal is to keep it going. We’ve been watching and focusing on it to see if we can help. We will continue to work with Mike and the Steinbrenner’s to figure out what we can do in the future.”

Team Penske president Tim Cindric told NBCSports.com that Alexander Rossi’s agent and father, Pieter, had approached the team earlier this season to see if it had interest in the 27-year-old driver.

“We told him to reconnect with us after May,” Cindric told NBCSports.com. “When we told them, it would be in a fourth car, they weren’t interested in being part of four cars.”

But does Team Penske have an interest in signing Herta?

“We’re not running four cars,” Cindric said. “That’s the end of that discussion.”

Andretti believes there are many teams in the IndyCar paddock that have interest in youngest driver ever to win an NTT IndyCar Series race when he won at Circuit of the Americas on March 24.

“You have a lot of others interested in him like Sam Schmidt and Ed Carpenter,” Andretti said. “I’ve even heard a few F1 teams are interested in him. There is a lot of interest because the kid is really good. That is great.

“But it’s our job to keep him in the family.”

Schmidt’s team was also interested in Rossi but realized if the money he had to offer was close to what Andretti could spend, he would stay with Andretti.

“Any driver that has a great situation with his engineer and his team, if they could get close on the money, I’m sure he would have rather stayed there than upset the apple cart,” Schmidt said.

Schmidt also spoke about McLaren’s interest in partnering with his team, which would once again be complicated because Arrow Schmidt Peterson is a Honda team, and Honda Japan does not want to do any future business with McLaren after an acrimonious split with McLaren F1 in 2017.

“Again, we have another year on our contract with Honda,” Schmidt said. “The company has stated perfectly clear they can’t be associated with (McLaren CEO) Zak Brown or McLaren, so I think that alienates us from that program.”

Andretti was offered a lucrative proposal by Brown to have McLaren join forces with Andretti Autosport and was about to switch from Honda to Chevrolet. But first-year Honda Performance Development president Ted Klaus convinced Andretti to stay with Honda, which in turn allowed Andretti to re-sign Rossi.

Honda plans on making Rossi its lead test driver when IndyCar goes to the 2.4-liter engine formula in 2021.

“We had to look at all of that, including McLaren,” Andretti said. “It’s going to suck if I see McLaren out there with another team because we worked so hard to make that happen. Zak and I are really close and wanted to make it work. We are partners in Australia. It will be really awkward if he makes it work somewhere else.

“I think a lot still has to happen for McLaren to come over, but they are not quitters. What happened at Indianapolis in May is going to make them more determined than ever. That is their mentality.

“Unfortunately, it won’t happen with us because they can’t work together with Honda. That means they would have to come in with a Chevy team.” 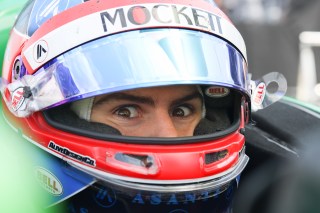 Young Herta has done a tremendous job isolating himself from the rumors and speculation and getting on with his rookie season in the NTT IndyCar Series. He is currently 14th in the standings with four races remaining this season. He is coming off an eighth-place finish in last Sunday’s Honda Indy 200 at Mid-Ohio.

“It’s always nice that there are people interested in me,” Herta told NBCSports.com “If something bad happens, there is potential for somebody else to give me a ride, which is nice. But I’m pretty happy where I’m at, at the moment.

“As long as you have a good car, you don’t think about that. I’ve had a good car most of the time.

“It gives confidence, not only for the actual race team but the marketing and PR department. All these other teams are fully funded, and we are running up front with them. Thanks to NBC, we have gotten great exposure at all of the races. PT (Paul Tracy) and Townsend Bell and Leigh Diffey and the broadcast group have done a tremendous job covering us. They have told me firsthand about that and that’s nice.

“Mike Harding and George Michael Steinbrenner, IV both made an investment in the team early on, so it didn’t really affect us. Luckily, we had Capstone Turbine jump on board as a co-primary and then as a primary the past two weekends is nice. Hopefully, they can keep going with us.”