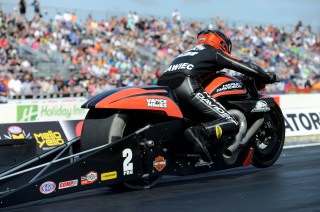 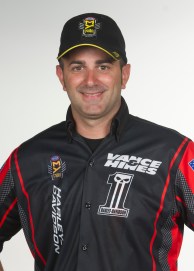 What went right in 2016: Krawiec had a strong season, winning almost one-third (five) of the 16 races on the Pro Stock Motorcycle schedule. He and teammate and 2015 (and five-time) champion Andrew Hines put up a strong effort, but in the end, both fell short of 2016 first-time PSM champ Jerry Savoie (Krawiec finished second, 24 points behind Savoie, while Hines finished third, 31 points back).

What went wrong in 2016: Krawiec struggled at times during the six-race Countdown for the Championship playoffs, most notably a first-round loss in the opener at Charlotte and quarterfinal losses at St. Louis and Pomona. Granted, Krawiec did win at Reading and Dallas, but when he lost in the second round of the season-ending race at Pomona, California, there went his chance for a fourth career PSM championship (previously won in 2009, 2011 and 2012).

What to look for in 2017: Krawiec wants a fourth championship in the worst way. Up until 2016, his primary nemesis was teammate Hines. Now he has to also contend with 2016 and first-time champ Jerry Savoie. There’s not much different Krawiec can do to reach the top other than what he’s been doing throughout his career. If he gets a couple of breaks, he very well may earn that fourth title in 2017.